Bill and I arrived home last night, road weary and glad to be back. It is an eight hour drive from Tallahassee to Fort Lauderdale and it does not seem to make much difference time-wise which route you take, Interstate or cross country from Tally to Ocala. At least the traffic was much less hectic yesterday than it was going down on Sunday, which was a good thing. I think our supper Wednesday night might have been loaded with MSG or something. I know I did not like my shrimp dinner and did not finish it, which is practically unheard of, me not finishing shrimp! But it just did not taste quite right and Bill said afterwards that his did not either. Whatever the cause, Thursday morning we both woke up with killer headaches and feeling very lethargic, like we were hung over (which we were not!). So that made for a very long drive home.

But the stay there in Fort Lauderdale (actually Pompano Beach) was very nice. I had a nice visit with a UL friend on Tuesday, Carol B. (Auntie Carol, for you ULers), and I took some cute pics of her granddaughter. Carol’s whole family was very nice and it was great to be able to put faces to names.

Here are some pics from our hotel balcony: 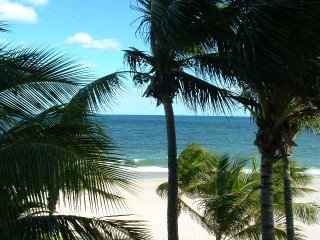 The beach on Monday morning, around 9 a.m. 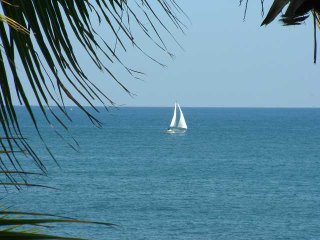 A sailboat I watched on Wednesday afternoon when I was taking a break from writing. I am thinking of making a series of several of these sailboat pics framed above our couch. 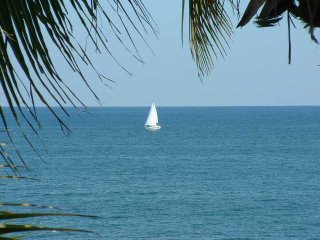 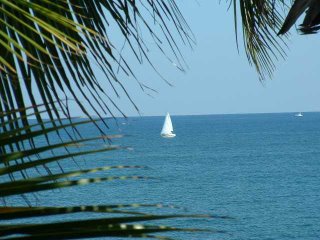 And does anyone know what these flowers might be? They were blooming in the pool / courtyard area. I think they might be a variety of hibiscus? 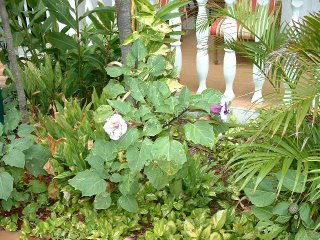 Whatever they are, they were very pretty to look at first thing in the morning while eating breakfast!