We (Bill & I) spent four nights (Sunday through Wednesday) at the hunting lodge where the 50th Anniversary Party was held. The hunting theme was a bit overdone for my taste, but then I’m not a mighty hunter! We removed some of the pelts from the walls, as their tails dangled down the back of your head when you sat down in certain chairs. One of the young children said we put earrings on the deer. One wall had the front end of a bear sticking out one side and the back end sticking out the other side! 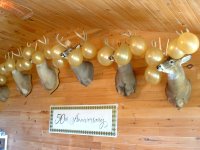 The 50th Anniversary Party began at three on Monday, the 9th and went on until long after dark! Everyone enjoyed themselves, especially the guests of honor. 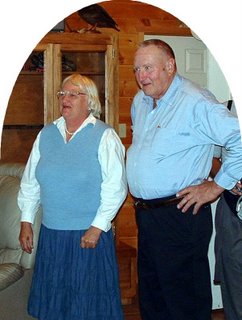 Tuesday Charles had the bright idea that we should all walk up (and back down) the glen at Watkins Glen. It’s 1.5 miles each way, with over 800 steps going up, depending upon the path you take. It was a nice day for such a trek, not too hot, partly sunny, not raining. And October is definitely the perfect month as far as the color of the leaves. Surprisingly, I wasn’t as sore afterwards as I was afraid I might be. Miss Munchkin had the right idea, though, riding in mom’s sling! 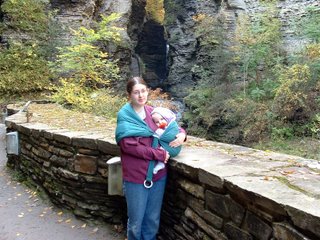 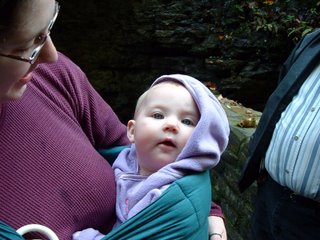 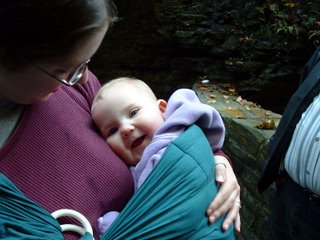 Wednesday we just hung around, taking more pictures, gathering up squash, apples and cider, and doing a little reminiscing along the back roads of our youth. The area has changed so much in the last thirty-five years. Someone told me that Yates County is now the second most Mennonite-populated county in the nation, right behind Lancaster, Pennsylvania. Amazing when you consider the first Mennonite family moved to Yates County around 1970!