We had a late start to our trip. I left too many things to accomplish for Friday morning. And then we had to make a trip to Charles’s girlfriend’s home to return her glasses that “somehow” ended up in his karate bag the night before. From there we attempted to find a “quicker” route to Kat’s house, so instead of only taking twenty minutes, it took us an hour. By then it was time to eat lunch! It was 2:00 in the afternoon (Central) before we left Alabama!

We drove as far as Knoxville, Tennessee, the first night. We were lucky to find two rooms, since there was a softball tournament in town. We took Kat & Miss Munchkin shopping for swimsuits and enjoyed the pool and whirlpool at the motel that night. I wish I had gotten a picture of Miss Munchkin in the pool. She sure enjoys water!

Saturday it was much cooler weather, down in the 40s for most of the day and snotty rain. Bill and I suddenly remembered why we moved south! Virginia is a long state to travel through on I-81. We began looking for a room in Hagerstown, Maryland, only to discover that there was a soccer tournament in town! Sound familiar? We finally found a motel with an indoor pool, got the last two rooms available, only to discover that it was full of eight to twelve-year-old soccer players who took over the pool.

Miss Munchkin traveled very well. We usually had to stop every couple of hours for a diaper change or feeding, but then we old people needed to stop that often to get out and stretch! 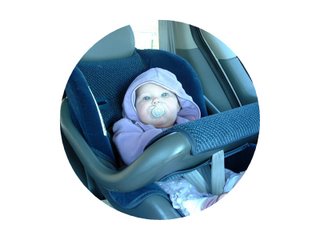 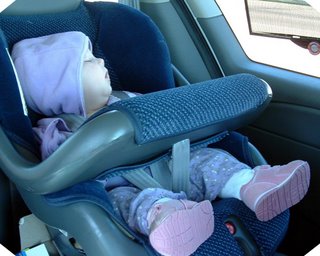 Sunday morning it was cool and sunny, but warmed up as we traveled further north. We arrived in Dundee about four in the afternoon (Eastern), visiting with family and enjoying a perfect October day. Miss Munchkin met her cousin Steven for the first time and they seemed to enjoy each other. Steven was a cutie and he loved showing Miss Munchkin all his toys at his Grandma’s house. 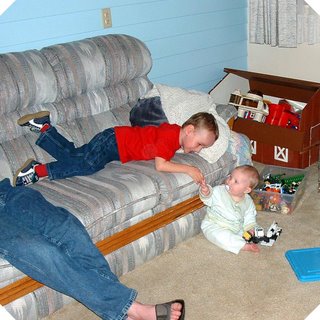 After a nice afternoon and evening with Bill’s brother and sister-in-law, we left Kat and Miss Munchkin and Charles there and headed for our bunks at the hunting lodge. More on that tomorrow!