Well, we survived D-Day! It was a long, long day Saturday.

We left home before noon on Friday, so we were in Evansville by 6 p.m. That gave us time to swim a bit, go eat supper and get a good night’s sleep. Saturday we got to the college at 9 a.m., which was the earliest you could begin moving in. There were lots of fraternity guys there helping with the unloading, so I didn’t have to carry anything, which was good because David’s room is on the 4th floor. But there was some delay in the bed lofts arriving … an outside company handles those and they were not very organized. We waited for bed parts from 10 till 2, with bits and pieces of it arriving throughout that time. So you had to wait in line to get your first pieces and then keep checking back to see if more had arrived. It certainly frazzled a lot of parents. So it was 3:30 before we finally left Evansville. And 9:30 by the time we got home.

David called Sunday noon … I had told him to call me Sunday night. He was in line for lunch, so he couldn’t talk long. But he sounded okay and said everything was going fine.

And so far I only see one thing he forgot to take … the summer reading book he was assigned when he went to orientation in June. That was sitting in the chair next to him computer, hiding under a magazine. So I will have to ship that to him today.

It did seem a little weird yesterday without David around, but I am sure we will adjust. David was definitely ready to leave home, ready to be at Evansville, ready for us to leave him there. It made it a lot easier for me knowing that he wants to be there and that it seems like a good place for him. And it’s only four weeks until the Parent Weekend! 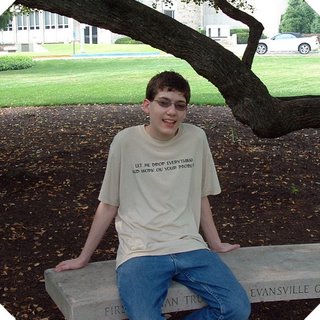 David at Evansville under the “lazy tree.” He’s moved in and ready for Mom and Dad to leave! 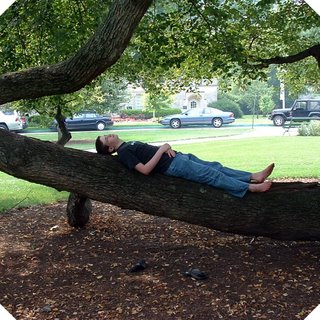 Charles being lazy on the “lazy tree.” He really liked this tree. It’s called the lazy tree because so many of it’s lower limbs are on the ground. 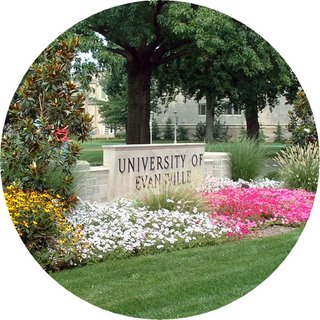 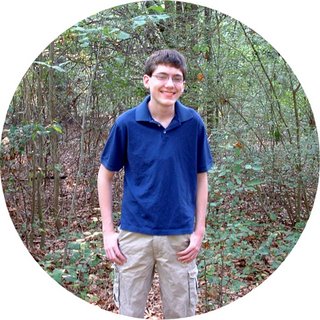 David, taken the day before he left for Evansville (August 17, 2006). Also the day he passed his road test and received his driver’s license!