Miss Munchkin visited with us last week and again yesterday. She’s trying to figure out this crawling thing to the point of having rug burns on her knees. But she hasn’t quite got the hand action going yet for crawling, just the bottom leg action. Funny to watch her scoot herself across the floor, but rather frustrating for her and she begins to voice her frustration before very long.

Miss Munchkin has discovered that she can actually grab things with her own hands and now find her mouth when she wants. So nothing is safe anymore!

Yesterday she had her second solid food, Grandma’s homemade applesauce. I wish I had gotten a picture of that! Her daddy had fed her a finger scoop of spaghetti sauce the previous night, thinking that would show her that she really didn’t want his plateful of food. Was he mistaken! She wanted more!

Here’s a pic from last week, June 30. She’ll be 4 months on July 7th, our 27th anniversary! She’s 20 pounds now … I think her mother is not feeding her well enough! 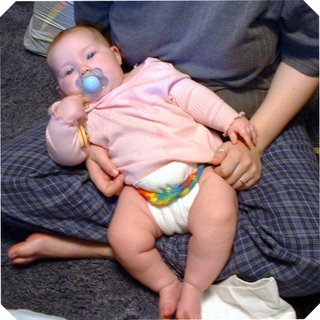 You’ll notice that Miss Munchkin does not wear any plastic pants (or wraps, as they call them these days) nor is she using safety pins with her cloth diapers. Kat has been practicing EC (Elimination Communication) for about two months now. It’s working very well. When at home or here at Grandma’s, she might wet one or two diapers all day long and rarely does Kat have to change a stinky diaper. Both Kat and I have learned Miss Munchkin’s cues and habits pretty well. If she’s not teething and not hungry, it seems like the only time she gets upset and cries is when she has to go potty or when she has wet her diapers (she hates, hates, hates being in wet diapers).

I have to admit I was skeptical at first when Kat mentioned she wanted to try EC. But it really does work! Here’s are some links if you want to learn more about it: